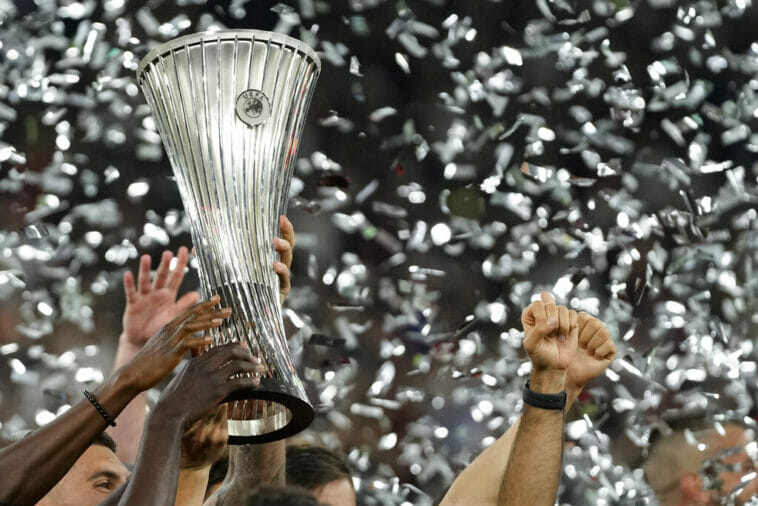 Roma players celebrate with the trophy after winning the Europa Conference League final soccer match between AS Roma and Feyenoord at National Arena in Tirana, Albania, Wednesday, May 25, 2022. AS Roma won 1-0. (AP Photo/Thanassis Stavrakis)
TwitterFacebookLinkedInRedditWhatsApp

The 2022-23 Europa Conference League is just days away from starting. This will be the second edition of this tournament, which is the third in the UEFA hierarchy below the Champions League and the Europa League.

The tournament is full of lesser-known teams on the continental stage who will be looking to achieve what Roma did last season and take the title. While there are some clear favorites from the start, teams arriving from the Europa League over the next year could change the landscape.

Anyway, what matters is now, so JefeBet will show you the favorites ahead of the start of the Europa Conference League group stage, as well as their respective odds.

Predictions, Odds and Betting Preview for the Europa Conference League 2022-23 After the Group Stage Draw

When Does the Group Stage of the 2022/23 Europa Conference League Start?

The champions of the 2020/21 UEFA Europa League and the big surprise of the 2021/22 Champions League, Villarreal, start as the strongest candidate to win this trophy. Considering what they have shown on the continental stage in recent years and with an experienced coach like Unai Emery, the “Yellow Submarine” seems to have all the necessary tools to fight until the end.

After reaching the semi-final of the Europa League last season, West Ham – a team that is not used to participating in continental tournaments – is also showing its candidacy to lift the trophy. They may give people something to talk about now that they are facing rivals who are theoretically more accessible, but they will have to correct certain things as the season progresses after their poor start to the Premier League.

After a five-year absence from the group stage of European competition, Fiorentina will finally have the pleasure of facing other European clubs, albeit in UEFA’s third tier tournament.

Regardless, this is a fantastic opportunity for the “Viola” to win their first European title since the 1960/61 UEFA Cup of Champions and continue the Italian dominance established by Roma the previous season.

Lucien Favre, who qualified Nice to the Champions League qualifiers in the 2017-18 season, will have a new opportunity to compete with “Les Aiglons” in a continental competition. While the team may advance easily from the group stage, things may become more complicated once they reach the competition’s final stages.

FC Köln appears to have risen from the ashes after several bad years in the Bundesliga, and a seventh-place finish in the previous league season sees them enter this Europa Conference League. Here, they could become a rival to be considered, especially after demonstrating at the start of this season that what they did last year was not a fluke.

In the previous Eredivisie season, AZ Alkmaar won the playoffs and advanced to this Conference League. Few expect them to win, but the same was once thought of Feyenoord, another Dutch club that reached the final in the first edition of this tournament. In this way, AZ will undoubtedly want to show that Eredivisie clubs can be feared in this competition. 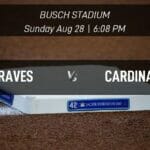 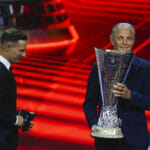