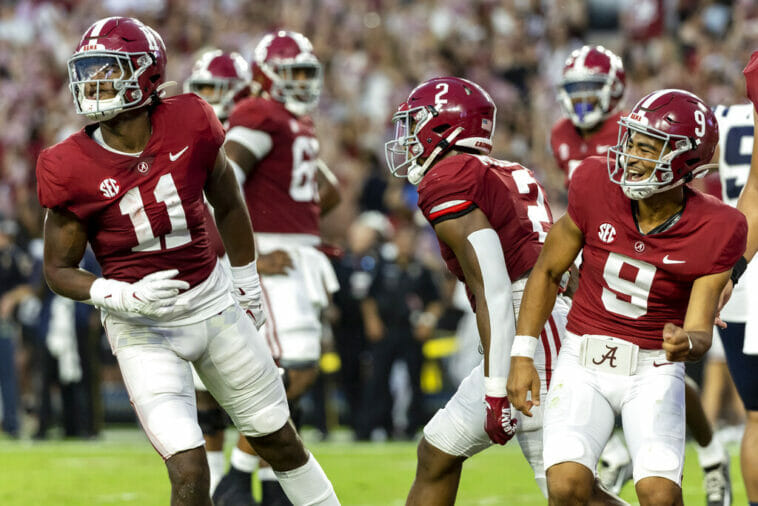 Alabama wide receiver Traeshon Holden (11) and quarterback Bryce Young (9) celebrate after combining on a touchdown pass during the first half of an NCAA college football game against Utah State, Saturday, Sept. 3, 2022, in Tuscaloosa, Ala. (AP Photo/Vasha Hunt)
TwitterFacebookLinkedInRedditWhatsApp

The second week of college football brings us the Alabama Crimson Tide vs Texas Longhorns, two teams that started the season on the right foot and are looking to keep their undefeated streak alive this Saturday.

Of course, Alabama comes into the matchup as a heavy favorite not only because they are ranked number one in the nation, but because they crushed Utah State 55-0 in their first game. As for Texas, they beat ULM Monroe 52-10 as visitors.

The Crimson Tide proved last weekend that losing several key players in the last NFL Draft is no reason to appease their desire for revenge and win the national title that eluded them last season.

Nick Saban’s men destroyed a Utah State team that was crowned Mountain Conference champion last season and never had a chance against Alabama, who had the luxury of scoring zero points in the final period of the game.

In addition to the solid defense that only conceded just over 130 total yards to the Aggies, the offense, without having a good night completing 18 of 28 passes, quarterback Bryce Young also recorded 193 yards, five touchdown passes and led his team in ground performance with 100 yards.

The University of Texas hopes to return to the good old days of college soccer this season, and at least they got off to a good start with a comfortable away win over Louisiana-Monroe.

Under the orders of Steve Sarkisian, Saban’s disciple, the Longhorns hope to end this season on a positive note and although the game against Alabama will not mark the rest of the season for the head coach, of course a good performance against the top favorites to win the national championship would be a great incentive.

Texas has the offensive weapons to try to upset the Crimson Tide defense, despite the fact that their quarterback is freshman Quinn Ewers. In his first appearance he threw for 225 yards, with two TDs and an INT, while Bijan Robinson moved the chains on the ground with 71 yards recorded.

The Longhorns have a good team to finish this season with a positive record and go to a Bowl, but the reality is that they have a tough time beating the Crimson Tide on Saturday.

Alabama is a machine for scoring points and also for not allowing them. Texas’ offense is good, but will they be able to do it all game long as the defense tries to stop, with what they can, the visiting offense. That’s where the problem comes in.

Texas is going to score, but so is Alabama, and certainly much more than the former because they have an elite defense. Possibly the best in the nation.

I like Texas, but against Alabama there’s not much to do. I’m going with the Crimson Tide spread. 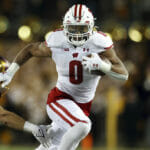 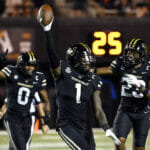