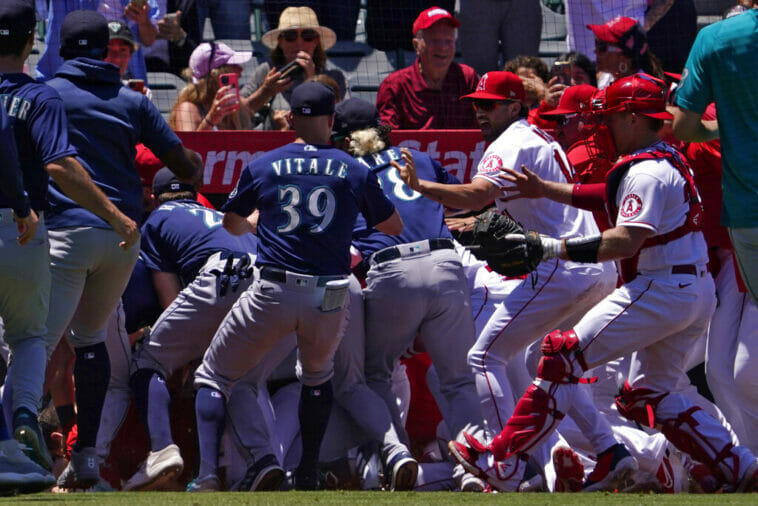 Several members of the Seattle Mariners and the Los Angeles Angels scuffle after Mariners' Jesse Winker was hit by a pitch during the second inning of a baseball game Sunday, June 26, 2022, in Anaheim, Calif. (AP Photo/Mark J. Terrill)
TwitterFacebookLinkedInRedditWhatsApp

After several games where tempers were quite heated, what seemed inevitable happened in the third and final game of the series between the Angels and Mariners, as players from both teams engaged in a long fight that ended with several players being ejected.

The events occurred shortly after the start of the game in Los Angeles, when Andrew Wantz, who was in charge of opening the game for the Angels, hit Jesse Winker with a pitch during the top of the second inning. This occurred after Wantz himself hit a pitch behind Julio Rodriguez’s head during the first inning.

As soon as he was hit by the ball, Jesse Winker reacted angrily — naturally — and began yelling and gesturing at the Angels’ dugout. On other circumstances, it would have been an isolated incident, but both teams had had tense moments the night before, when Mike Trout was nearly hit in the head by a throw from Erik Swanson.

Winker’s reaction caused both benches to empty quickly, and both Angels and Mariners players engaged in a fight that lasted nearly five minutes. The fight involved not only players, but also members of the coaching staff, and even the injured Anthony Rendon was seen pushing Jesse Winker with his healthy hand despite suffering from a right muscle injury.

After the fight was over, Jesse Winker left the field making an obscene gesture to the Angels’ fans, who booed him as he approached the dugout.

What was the outcome of the fight between Angels and Mariners?

The brawl ended with six players from both teams being ejected, in addition to both Angels’ interim manager Phil Nevin and Mariners manager Scott Servais.

The match was halted for approximately 20 minutes due to the fight, and then resumed normally, with the Angels taking the win by a close 2-1 score. Because the number of games suspended for each individual member was released today, we created a table to keep track of the suspensions.

This brawl may be one of the toughest that the MLB has seen in recent years, but we’ll let you be the judge of that and check out our feature on the best brawls in MLB history here, at JefeBet. 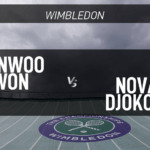 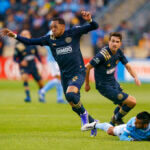