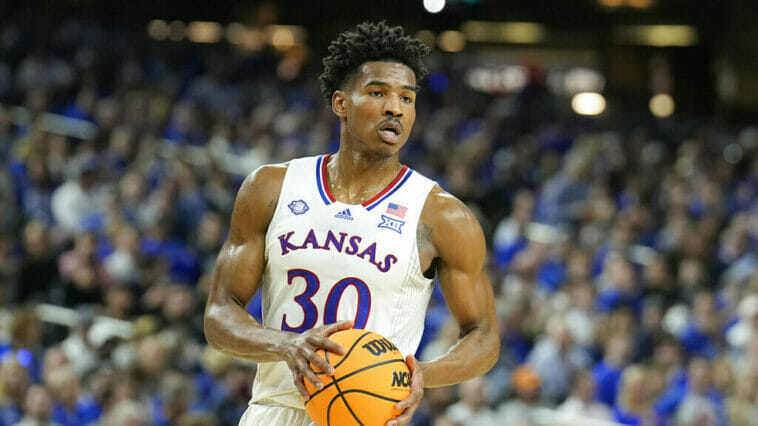 Kansas guard Ochai Agbaji (30) shoots over Villanova forward Jermaine Samuels during the second half of a college basketball game in the semifinal round of the Men's Final Four NCAA tournament, Saturday, April 2, 2022, in New Orleans. (AP Photo/David J. Phillip)
TwitterFacebookLinkedInRedditWhatsApp

The University of Kansas will be losing one of its best and most valuable members who has been a part of the Jayhawks’ roster for four years now: fourth-year player Ochai Agbaji will leave the team and become eligible for the 2022 NBA Draft after having the best season of his NCAA career and reaching the ultimate goal.

It’s been inspiring to watch the young player’s story unfold: he entered the Kansas program as a recruit who was not among the nation’s top prospects, but who still made an immediate mark in his arrival, averaging 25.9 minutes in his first year of college basketball (8.5 points, 4.6 rebounds). Agbaji wasn’t the same lethal three-point shooter he was last season, but like the rest of his game, he improved and matured in the important areas each year.

He also led Kansas to a 25-6 regular season record, a win in the Big 12 conference tournament, and a No. 1 seed in the Midwest region for March Madness, where they defeated Villanova University in the Final Four and North Carolina University in the final, becoming national champions for the first time since 2007-2008, with a final record of 34-6.

The 22-year-old consolidated a season full of individual recognitions, with the most important ones being:

Agbaji made his inclusion in the 2022 NBA draft official through social media and by writing a letter to the University of Kansas, which was published on the institution’s website.

”How did it feel? I’ve probably been asked this a thousand times since we won the national championship. And while I’m not sure I’ve found the best words to accurately describe the relief , elation and surreal feeling of that moment, I do know this much: I’ll never get tired of talking about it.

From start to finish, this entire season felt like it was scripted. A season I will always remember and never take for granted. But before I put my collegiate career in the rearview mirror and look to the future, I want to thank some of the people who helped put me on the road to success. My family, my teammates, my coaches and of course, the Jayhawk Nation.

No matter where basketball takes me, I will always be a Jayhawk. And with that said, I’d like to make my statement to the NBA Draft official. Rock Chalk!”

Ochai Agbaji on his social media, announcing his entry into the 2022 NBA draft.

Ochai Agbaji will be the eighth all-time highest scorer in Kansas University history, and he is likely to be a first-round choice in the NBA draft in 2022. Which will be the team that selects him? 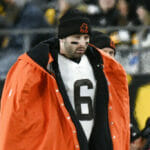 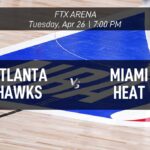