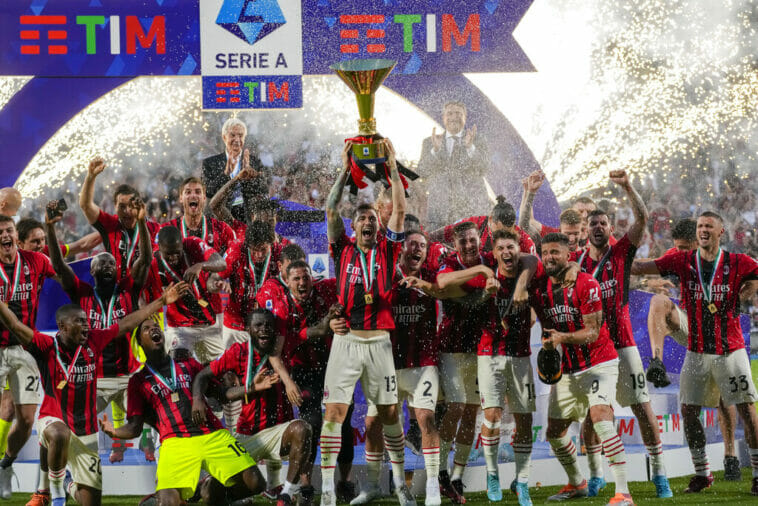 AC Milan's Alessio Romagnoli players holds up the trophy as he celebrates with teammates after winning the Italian Serie A title at the end of a match against Sassuolo, at the Citta del Tricolore stadium, in Reggio Emilia, Italy, Sunday, May 22, 2022. (AP Photo/Antonio Calanni)
TwitterFacebookLinkedInRedditWhatsApp

Serie A 2022-23 is set to kick off next Saturday, August 13 with a clash between reigning champions Milan and Udinese. However, the Rossonero looks likely to struggle to defend its crown, as the title race is expected to be fiercely contested after their direct rivals strengthened their ranks.

Here at JefeBet, we give the bookmakers’ odds for the teams that begin as favorites to win the Serie A title, along with their specific analysis to consider their prospects.

Inter Milan were responsible for breaking Juventus’ run of nine consecutive league titles in the 2020/21 season, and the 2021/22 season saw them fall just two points short of retaining their crown. However, bookies rank it as the favorite to win the Serie A title again in 2022-23.

The return of Romelu Lukaku, their leading scorer in that title-winning season, has a lot to do with why the team is considered a favorite. Additionally, Inter seem to have the best squad for this season, but they will have to be put to the test.

Juventus are coming from finishing fourth in Serie A in the last two seasons, but with a revamped squad and Serbian striker Dusan Vlahovic leading the attack, the “Vecchia Signora” is expected to fight again for the top spot it lost some time ago.

In addition, Juve added defender Bremer to their ranks to cover for Matthijs de Ligt’s absence, and considering that the Brazilian was ranked as the best defender of the past season,the Bianconeri’s backline will certainly have a much-needed improvement, considering that out of the top 4, they were the team that conceded the most goals in the 2021/22 season.

While AC Milan accomplished an unlikely victory last season by capitalizing on their rivals’ mistakes to win their first Serie A title since 2010/11, bookies do not believe that the team will be able to replicate this feat in the 2022-23 Serie A season.

Milan appear to have the worst team among the favorites, especially up front, with Zlatan Ibrahimović and Olivier Giroud combined for a total of 75 years old, and the Swede having several health problems. The arrival of Divock Origi to the team does not appear to be a solution to the problem, unless the Belgian makes a 180-degree turn from where he is currently. If this doesn’t happen, it could complicate the season for the “Rossonero.”

If there is anyone who knows Serie A well, it’s José Mourinho, and the Portuguese coach is hungry for silverware: he proved it by winning the UEFA Europa Conference League last season, which was Roma’s first trophy in 11 years.

The capital team has undergone a radical change following the arrival of Mourinho, and the acquisitions of players such as Paulo Dybala, Nemanja Matic, Marash Kumbulla and Georginio Wijnaldum promise to make Roma fight for the top places in the table.

Can Napoli still be trusted? The “Partonopei” had an unmissable chance to win the Serie A title for the first time since 1990 last year as they were top of the table for much of the first half of the season, but since the beginning of December, they have lost the lead and have not been at the top again except for one matchday.

This Serie A season, the team will be without long-term references like as Kalidou Koulibaly, Lorenzo Insigne, and striker Arkadiusz Milik. As a result, Napoli may struggle to even qualify for the Champions League.

After three consecutive seasons finishing third in Serie A, Atalanta had a difficult 2021/22 season that saw them finish eighth in the table and fail to qualify for European competitions.

Nevertheless, this could help “La Dea” to concentrate only on its domestic soccer. The team coached by Giampiero Gasperini has already shown that it can surprise both Italian and continental rivals, so it is worth keeping an eye on them throughout the year. 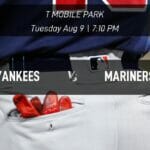 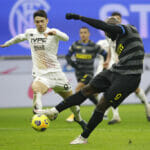