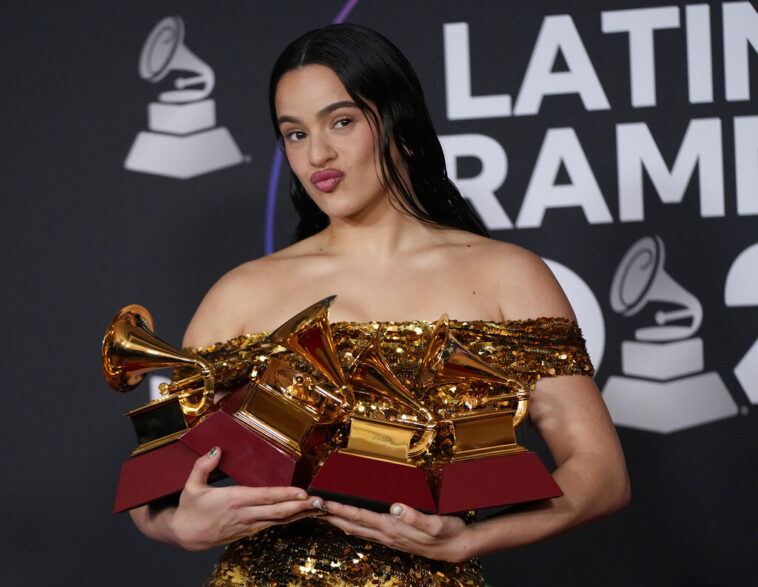 Rosalia poses in the press room with the awards for album of the year, best alternative music album and best recording package for "Motomami" at the 23rd annual Latin Grammy Awards at the Mandalay Bay Michelob Ultra Arena on Thursday, Nov. 17, 2022, in Las Vegas. (AP Photo/John Locher)
TwitterFacebookLinkedInRedditWhatsApp

Did you miss the winners of the Latin Grammy Awards 2022? Don’t worry, at JefeBet we have you covered with the best recounting of what happened on this joyful and wonderful day that seeks to honor the careers and musical works of many artists.

Read below to find out who were the Latin Grammy winners of the 10 most important categories of the awards that took place in Las Vegas. Who do you think the winners were?

1. Record of the year: Tocarte – Jorge Drexler and C. Tangana

Record of the Year is the most important award of this award season in the music world, and it was won by Uruguayan Jorge Drexler. The song “Tocarte” was written with Spaniard C. Tangana, they met one night at a previous edition of the Latin Grammys. Since then, their relationship has strengthened to create several successful songs.

2. Album of the year: Motomami – Rosalía

On the other hand, Rosalía won four Latin Grammy Awards thanks to her album Motomami. The most important award was Album of the Year, which she received with tears in her eyes, and for which speech she mentioned how important and difficult it was for her to record this album. Additionally, it won in the three other categories: Best Recording Engineering, Best Alternative Music Album and Best Packaging Design.

3. Song of the year: Tocarte – Jorge Drexler and C. Tangana

Jorge Drexler also won this nomination with his song “Tocarte”. In addition, he was one of the top Latin Grammy winners, with seven record players in total. The album to which this song belongs, and which was also a winner, is titled Tinta y Tiempo. This is a production that talks about his own fatherhood, emotions and his creative process.

Best New Artist is a category of the Latin Grammy Awards that generates a lot of expectation, as it gives a platform to those who are emerging in the music world, as well as it allows them to gain greater recognition. This award was very important, as it was a tie between 25-year-old Mexican singer-songwriter Silvana Estrada and 95-year-old Cuban composer Ángela Álvarez. Without a doubt, it was very emotional.

In the category of Best Pop Vocal Album at the Latin Grammy Awards, Colombian, Sebastián Yatra, won all the awards. His album Dharma has consolidated him as one of the most listened to Latin artists in Latin America and in some English-speaking countries as well. In total, he won two Latin Grammys.

In addition, Christina Aguilera swept with her album Aguilera, winning Best Traditional Pop Vocal Album. This artist recorded her first album in Spanish in 2000, and ever since then, it has been hit after hit for her. In this album she put herself in the center, and made a self-definition of herself as a woman with courage and remarkable skills.

In Best Pop Song, Jorge Drexler and Sebastián Yatra were tied. On the one hand, there is “La guerrilla de la concordia”, a song that advocates compassion in a world of wars and, on the other hand, “Tacones rojos”, a romantic revelation with danceable pop tones that has been played a lot during the last few months.

The Best Urban Fusion/Interpretation category at the Latin Grammys was won by Bad Bunny with “Titi me preguntó”. This is one of his most famous songs from his album Un verano sin ti. His single and album have been this summer’s themes par excellence, and the academy did not disregard his excellent work.

For Best Reggaeton Performance, El Conejo Malo had the best odds of winning at the Latin Grammys, and he did. He had “Yonaguni” and “Sorry bb:/”. The last one, recorded with Julieta Venegas, took the prize. What was a really unexpected combination of two artists that apparently have very different styles, turned out to be a success.

Lastly, Bad Bunny won the Latin Grammy for Best Urban Music Album with Un Verano Sin Ti. This was absolutely expected, as it has been at the top of the playlists of almost all music platforms and, in addition, it has become an icon of Latin music. 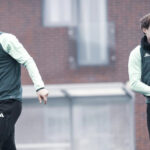 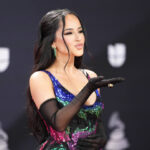