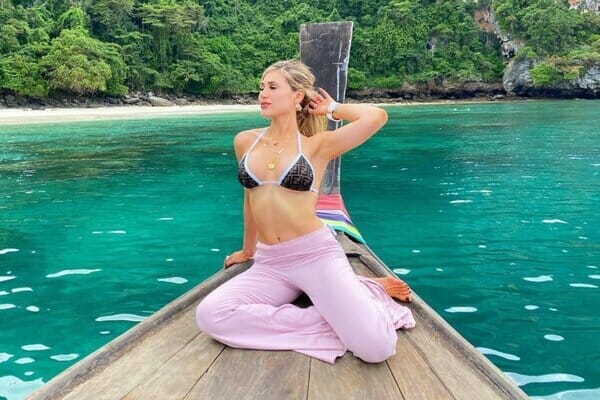 At press, Canelo Alvarez is the IBF, WBA, WBC, WBO and The Ring Super-Middleweight Champion. While the Guadalajara-born boxer’s belt collection is impressive, gossip-hounds adore the fighter for his accolades beyond the ring. That’s right, Canelo is also an undisputed ladies man. While he’s currently enjoying marital bliss with Chilean influencer, model, and celebrated businesswoman Fernanda Gómez, he looks fondly upon his memory bank of girlfriends to get him through those rough patches. We’re here to help you do the same with a look at the top wives and girlfriends (WAGs) of “Little Cinnamon”.

Let’s begin with the one who locked the boxer down in the last round. As mentioned above, Fernanda Gomez was a somebody before she became known as Canelo Alvarez’s wife. With well over 1.1 million followers on Instagram and a personal net-worth of $20 million she can hold her own with or without a ring. But there’s depth behind the beauty. In addition to wooing fans with her stunning looks, she is a successful business owner and money manager. Of course, Gomez’s most proud role is that of mother to her and Canelo’s daughter, Maria Fernanda
Alvarez. Canelo would be wise to leave his playboy days behind him if he wants to hold on to this Chilean gem.

Canelo tends to surround himself with beautiful people, which includes his marketing manager Nelda Sepúlveda. Like Canelo, Sepulveda hails from Guadalajara which gives them a hometown connection. When you combine that with a business relationship and sexual chemistry a union is inevitable. While rumors swirl about how on-again off-again their relationship has been, there’s no denying that Nelda Sepúlveda is more than an ex-girlfriend. The two share a son, Saúl Adiel Álvarez, who was born in 2019. That timeline fuels the rumorville narrative that Canelo and current wife Fernanda Gomez were on a “break” (or not) when the fighter and Sepulveda hooked up for another round.

Valeria Quiroz is another model that the IBF/WBA/WBC/WBO belt wielder has unbuckled. The two have a daughter from their brief stint in the bedroom – Mia Ener Alvarez. Alvarez ended things with Quiroz around 2014. It’s worth noting that Valeria Quiroz has become an even hotter topic of late, after being linked to the one and only El Chapo. Given her connection to a former drug lord from the Sinaloa Cartel. Canelo would be wise to avoid rekindling any flame with Quiroz as the red-head may get burned.

Marisol González Casas may be the highest profile Canelo Alvarez girlfriend on this list. She is a major Mexican television personality and actress. She even competed in the Miss Universe in 2003. Marisol is muy caliente in the mainstream, with over 2.3 million Instagram followers and a legion of fans than can only be rivaled by her former flame. Back in 2010-11 the two were one of the most famous couples amongst the hispanic-American community and were engaged before separating in 2012. Both are doing just fine without the other, but what a power couple they would make today if it lasted.

We’re throwing this one back to the very beginning when Canelo got his first patch of red hairs. Alvarez and Karen Beltran were high school sweethearts before the budding fighter dropped out to become a professional boxer in 2005. Despite his quick rise to fame, the relationship maintained through to 2007 when they welcomed Canelo’s first child into the world – Emily Cinnamon Alvarez. Is there ever a scenario where a Canelo hookup doesn’t result in a bouncing baby for the boxer? We’ll save that for another article. Unlike with other Canelo Alvarez girlfriends (and his wife) this former partner maintains a fairly private life. That said, she does appear in social media for daughter Emily’s milestones from time to time. She’s clearly still hot, in addition to being a great mother!

Stay tuned to the JefeBet Locker Room as we deliver other gossipy goods on hispanic athletes and personalities from around the wild world of sports. 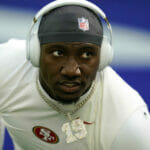 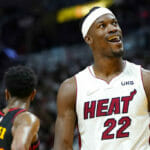