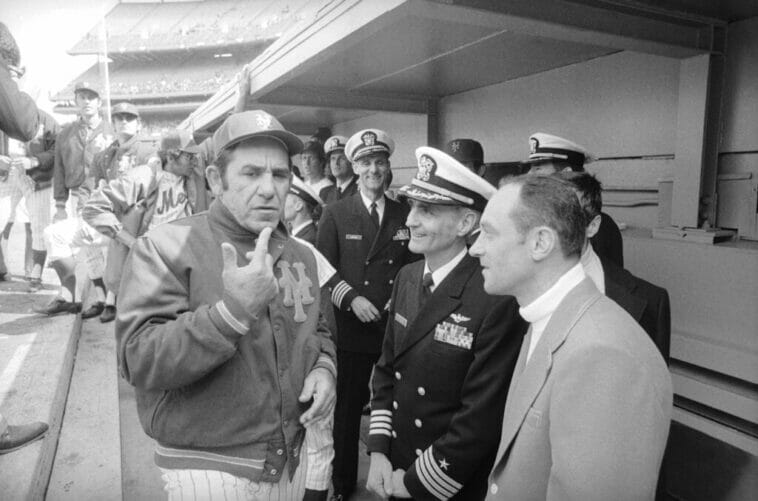 New York Mets manager Yogi Berra gestures in New York as he chats at the Mets' dugout at Shea Stadium with former POW Navy Cmdr. Theodore F. Kopfman, right, Oflemore, Calif., and Navy Capt. Howard Rutledge, second from right, of San Diego, Calif., April 7, 1973. The photo session took place prior to start of the Mets opening game of the season against the Philadelphia Phillies. Rutledge and Kopfman were among a group of 11 former prisoners of war invited to open the game by tossing out the first ball. (AP Photo/John Rooney)
TwitterFacebookLinkedInRedditWhatsApp

For this reason, at JefeBet we want to pay tribute in honor of Memorial Day 2022 to those athletes who served their country. Although many will be left out of this list, here we leave you the five most recognized both as professionals and in their military career.

Not for nothing was David Robinson known in the NBA as “The Admiral”. The San Antonio Spurs star went to college at the United States Naval Academy and served in the Navy after graduation. San Antonio drafted him in 1987, but he did not wear the uniform until 1989, as he served two years in the Navy. Robinson served as a civil engineering officer at the Kings Bay Naval Submarine Base in Georgia.

Later he would begin his basketball career: there he won two NBA championships, an MVP award, the Rookie of the Year award, an award for Best Defensive Player, on one occasion he was crowned rebounding champion, scoring champion, blocking champion, 10 times he was in the All-NBA and participated in 10 All-Star Games.

One of the best catchers in Major League history played an important role in World War II. Despite signing with the Yankees in 1943, between 1944 and 1945 Berra enlisted in the United States Navy, where he was involved in the famous D-Day invasion of Normandy Beach, where he was tasked with launching rockets at German defenses at Omaha Beach and for which he was awarded a Purple Heart.

After his service he debuted in the Major Leagues in 1946, where he won 10 World Series, three MVP awards, went to 18 All-Star Games and is part of the Cooperstown Hall of Fame. Undoubtedly, he was one of the greatest military athletes in history.

Former Dallas Cowboys quarterback, Roger Staubach, was also known as Captain America after attending the US Naval Academy. Staubach was selected by the Cowboys in the 1964 Draft, but did not play for the team until 1969 due to his commitment to serving in the Armed Forces. He served in the Supply Corps from 1964 to 1968 and spent a year of his service in Vietnam, helping to supply Da Nang Air Base.

For his part, in the NFL, Staubach is remembered as one of the best quarterbacks of the history of the Cowboys, a team with which he won two Super Bowls, being MVP in one of them, in addition to being selected six times for the Pro-Bowl and being a member of the Hall of Fame.

Listed by many as the best hitter in the history of the Major Leagues, Ted Williams was not only excellent in the batter’s box, but also performing aerial maneuvers. After hitting for one of his two American League Triple Crowns in 1942, the Boston Red Sox star became one of the great military athletes by serving in the US Navy and Marine Corps from 1943 to 1945, training as a pilot while playing Army League baseball.

Upon his return he won two MVPs and helped the Red Sox reach the World Series, but in 1952 he returned to military service for the Korean War, where he served as a Navy combat aviator and where he almost lost his life after being hit by a Navy F9F Panther jet.

Williams flew 39 combat missions and won the Air Medal with two Gold Stars in second and third place. While in MLB he won six batting titles, went to 19 All-Star games, is the last player to hit .400 in a campaign, and is a member of the Hall of Fame.

Unfortunately, Pat Tillman is one of those tragic cases left by the war, since his great career as an American football player was cut short in 2004 after he died serving the United States.

After four seasons with the Cardinals from 1998 to 2001, Tillman projected to be one of the best safeties in the league. However, in June 2002 he decided to enlist in the United States Army following that year’s terrorist attacks, despite having the opportunity to sign a three-year, $3.6 million contract with Arizona.

Tillman served in Iraq and Afghanistan and was in the Army Rangers before his death by friendly fire at the age of 27 on April 22, 2004. He was posthumously awarded the Silver Star and the Purple Heart, among several other military honors. 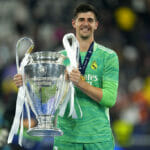