This Sunday, November 20, a long day of NBA action awaits us, in which one of the most attention-grabbing games will undoubtedly be the Grizzlies vs Nets.

The Nets are still fighting against the current in order to stay afloat after a forgettable first few weeks of the competition. Perhaps, this game against the Grizzlies at home, will not be the game they would like to face at this time because they are one of the best teams in the league.

JefeBet brings you the best analysis of the different NBA games with their respective predictions, as well as the best sports betting content, so here we leave you our Memphis Grizzlies vs Brooklyn Nets prediction.

Predictions, Odds, and Betting Preview for the Grizzlies vs Nets NBA Regular Season Game on November 20, 2022

The Grizzlies continue to prove that what they did last campaign was no fluke, and they arrive to this game after ending a two-game losing streak with a resounding 110-121 win over the Oklahoma City Thunder, in which Jaren Jackson Jr. had a great performance by scoring 25 points and grabbing 12 rebounds in what was his second performance of the year.

Injuries have been the Grizzlies’ main enemy in recent weeks, as not only they have lost Desmond Bane until mid-December, but they will also have to face this game without the participation of Jackson Jr. and Morant. In addition, they will have to play away again, something that they will surely not like considering that they have lost four of their last six games as visitors.

Still, history is in their favor this time around, as they have won their last four visits to this venue, and they have just one loss in their last nine meetings with the Nets, including seven consecutive victories.

After last campaign’s disappointing performance, in which they fell in the first round of the playoffs, the Nets are obliged to prove that they can be a team capable of fighting and achieving great things. Although they have started off with the wrong foot, they have looked better since Joseph Tsai begun leading the team.

Surprisingly, Kyrie Irving’s absence also seems to have worked in the team’s favor, as they have a 4-3 record since being suspended, with six of those games being played away from home. Hopefully, his return to the Barclays Center will serve as a trigger for them to finally sneak into the top spots in the Eastern Conference.

While they still have room for improvement in their offense, the Nets showed in their previous game that they have the tools to be solid defensively, as they defeated the Portland Trail Blazers by a score of 109-107with Kevin Durant once again leading the team with 35 points.Meanwhile, Royce O’Neale recorded a triple-double of 11 points, 11 assists and 10 rebounds..

Although they still have a negative record, things looks encouraging for the Nets, who have been doing well on defense, and on offense. They have an inspired Durant, who has also started to get more support from other players like Joe Harris, Royce O’Neale and Yuta Watanabe.Even Ben Simmons seems to finally be getting into rhythm.

On the other hand, the Grizzlies, continue to get good results under the leadership of a Morant, so his absence, and Bane and Jackson Jr. absences will be hard for them. The offense will become weak without them, something that, added to a vulnerable defense, makes them even more worried about this game.

The Grizzlies have shown doubts in their games away from home this campaign, so we hope that the Nets can continue to display the performance they have had recently, and take advantage of this occasion against a visiting team with important losses and take a comfortable victory. 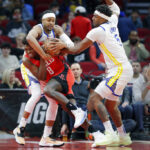