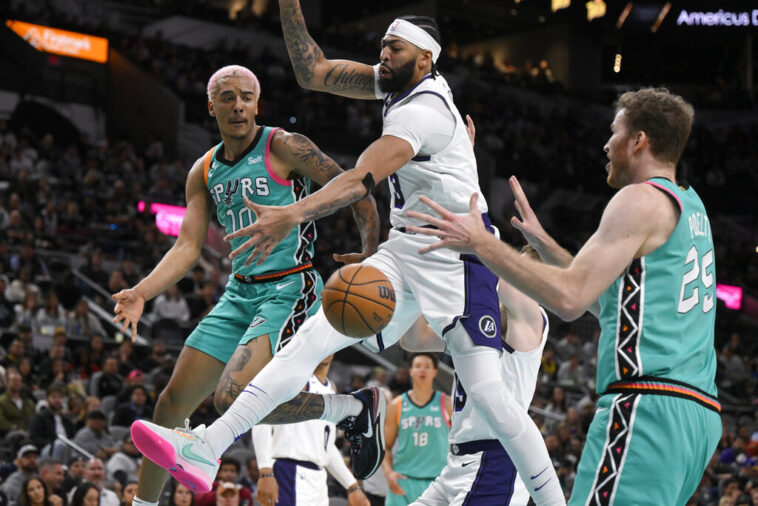 San Antonio Spurs' Jeremy Sochan (10) attempts to pass to teammate Jakob Poeltl (25) as he is defended by Los Angeles Lakers' Anthony Davis during the first half of an NBA basketball game Friday, Nov. 25, 2022, in San Antonio. (AP Photo/Darren Abate)
TwitterFacebookLinkedInRedditWhatsApp

This Saturday, November 26th, the NBA will offer us a new chapter of this Lakers vs Spurs clash, which promises to be another very entertaining duel.

In what will be their third meeting in less than a week, the Lakers will travel to Texas to take on the Spurs for the second night in a row. The Lakers have dominated both of these meetings, and the Spurs will be looking to defend their home court.

Here at JefeBet, you’ll discover the most accurate predictions and the greatest betting odds for the Los Angeles Lakers vs San Antonio Spurs matchup.

The Lakers have been one of the biggest letdowns of the 2022–23 NBA season, but they have recently begun to show some signs of life. They will undoubtedly have celebrated when LeBron James returned last night after missing the previous five matchups, which enabled them to win their fourth straight game.

Anthony Davis has been on fire offensively recently, improving his average to 26.4 points per game, so with the return of James and the return of Dennis Schroder, everyone expects a significant improvement in a Lakers’ offense that is currently averaging 110.7 points per game.

In fact, it was Davis who led Los Angeles to a 105-94 victory over the Spurs last night, with a total of 25 points, hitting 10 of the 13 shots he attempted, as well as 15 rebounds, while James contributed 21 points and 5 assists.

The Spurs surprised everyone with a strong first two weeks of play, but as expected, they failed to keep that form for very long. As a result, they have lost 12 of their last 13 games, including two against their opponents right now, and are now struggling to move up from the bottom of the Western Conference.

The team coached by Gregg Popovich has had difficulties to be consistent on offense; however, none of that compares to how terrible they have been on defense, coming into this game as the worst team in the NBA in that aspect, with an average of 120.7 points allowed per game and allowing their opponents to have a shooting percentage of 50.9% from the field.

Given that Davis is playing at a great level and that both Schroder and Westbrook are developing into two very good quality linebackers, it will be best to anticipate a very dangerous Lakers’ offense moving forward. James had a good performance yesterday, demonstrating that he is a player who doesn’t need much time to get into rhythm.

We believe the Spurs, who have struggled offensively even at home, where they average 110.7 points per game, and have looked inferior to the Lakers in both of their games so far this season, won’t be able to contain all that offensive power.

The difference between the two teams has been more than evident in their two recent clashes, and although they are on the road, the Lakers’ upward trend is interesting and cannot be ignored. Therefore, we expect LeBron and his people to have another solid performance, dominating the game for the most part and thus adding another win against a weak Spurs. 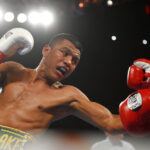 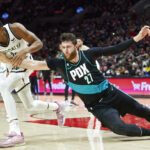