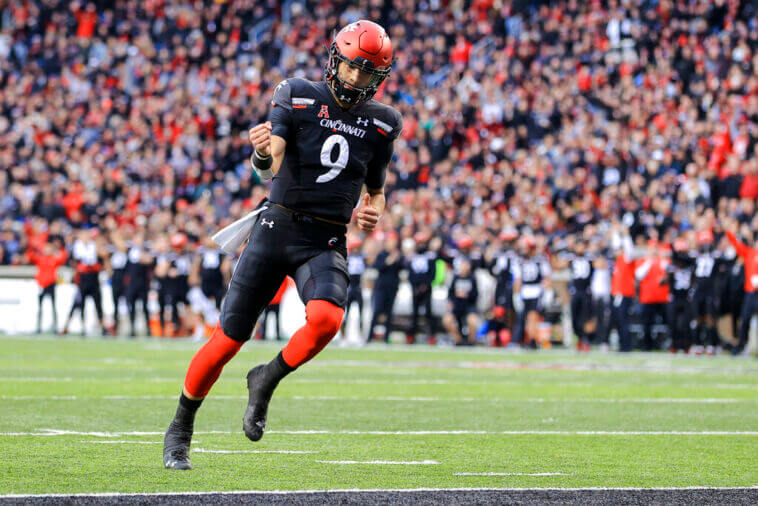 FILE - Cincinnati quarterback Desmond Ridder fist pumps as he celebrates the touchdown by running back Jerome Ford during the first half of an NCAA college football game against SMU, on, Nov. 20, 2021, in Cincinnati. The Bearcats ran the table in the American Athletic Conference and became the first team from a second-tier conference to reach the College Football Playoff, taking their only loss to No. 1 Alabama in a national semifinal. (AP Photo/Aaron Doster, FIle)
TwitterFacebookLinkedInRedditWhatsApp

College football is another draw for this weekend packed of sporting activities. In this case, it will be the turn of the Cincinnati Bearcats vs Arkansas Razorbacks game that will determine which of the two teams will start the season off on the right foot.

JefeBet provides predictions and odds not only for the National Football League games, but also for football games in the NCAA, a collegiate division with excellent teams and very exciting confrontations, about which we provide detailed information.

Predictions and Betting Preview for the Cincinnati Bearcats vs Arkansas Razorbacks College Football Game on Sept. 3, 2022

Betting on the Cincinnati Bearcats

The Cincinnati Bearcats made history when they became the first Group of 5 team to make the College Football Playoff. With a 13-0 regular season record, they lost in the semifinals to Alabama 27-6.

The big casualty for Cincinnati is the loss of quarterback Desmond Ridder, who will continue his career in the NFL. The replacement will come from either Ben Bryant or Evan Prater.

Cincinnati lost quarterback Desmond Ridder to the NFL, and will have quarterback Ben Bryant or quarterback Evan Prater to steer the ship. Running back Jerome Ford was another player that left for the big leagues, leaving head coach Luke Fickell with a noticeable void.

With nine games won in 2021 – including a bowl win over Penn State – the Arkansas Razorbacks have suffered the loss of wide receiver Treylon Burks, who will continue his career with the NFL’s Titans. However, hopes are pinned on KJ Jefferson, the returning quarterback.

It will be the first meeting in NCAA history between the two teams. The last time Cincinnati played a regular-season game against a Southeastern Conference (SEC) school was a 45-23 loss at Tennessee on Sept. 10, 2011. The last win against an SEC team was in the Liberty Bowl against Vanderbilt at the end of 2011.

The Razorbacks, meanwhile, last faced an American Athlete Conference (AAC) school on Oct. 20, 2018, when they picked up a home win over Tulsa.

The American Football Coaches Association (AFCA) poll has Cincinnati ranked No. 22 and Arkansas ranked No. 23, demonstrating the two teams’ evenness.

At JefeBet we believe it will be a very even match, taking into account that it’s the beginning of the season and both teams are just finishing tuning their engines. 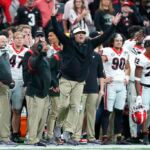 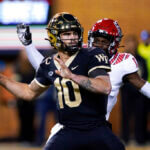