The sixth week of NFL action brings us the 49ers vs Falcons game, which features two NFC teams that have done well so far and want to keep on winning.

San Francisco took over the lead in the NFC West with a 37-15 win over the Panthers, while Atlanta lost a controversial game for the NFC South lead to the Buccaneers, 15-21 .

Without further ado, at JefeBet we leave you with the best preview of the San Francisco 49ers vs Atlanta Falcons match.

With what is considered the best defense in the league, the 49ers moved up to the top of the NFC West last weekend after the rest of the teams in the division were defeated.

The offense continues to improve, anchored by Jimmy Garoppolo, who surpassed 250 air yards for the first time against Carolina and threw two touchdowns. On the ground, they continue to wreak havoc, topping 150 yards for the third time thanks to a stellar performance by Jeff Wilson Jr. who recorded 120 yards on 17 carries.

But, as we have already mentioned, the defensive side is the face of this team. Along with the Bills, they have conceded the fewest points this year, as well as the fewest total yards, average yards per play, net yards per pass and yards per carry. There is a reason why they have not yet allowed more than 19 goals in 2022.

The Falcons came very close to pulling off a huge comeback last week in Tampa Bay and had it not been for a controversial referee decision, who knows if it’d have happened.

The truth is that Atlanta won’t have an easy game against San Francisco despite playing at home. Facing the Buccaneers’ powerful defense, their 15 points all came in the fourth period. This doesn’t bode well against the 49ers. While the Falcons have the third best yards per carry average, remember that San Francisco is allowing just 3.0 yards per carry on average on the ground.

Therefore, if their offense cannot get on track, it will be very difficult to match their record. The Falcons’ defense has allowed at least 20 points in each of their games, and while it is not among the worst in the league, it is also not a guarantee of victory.

The Falcons’ offense had a lot of trouble overcoming a good defense like the Buccaneers’, something that will be repeated this Sunday against the 49ers. Marcus Mariota and company have found ways to win, but both victories came against two of the highest scoring teams on the circuit.

For their part, San Francisco will find room to continue with their offensive display against an Atlanta team that has struggled to stop opponents, although they should not exceed 30 points as they did against the Panthers. 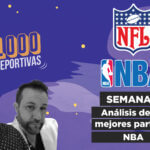