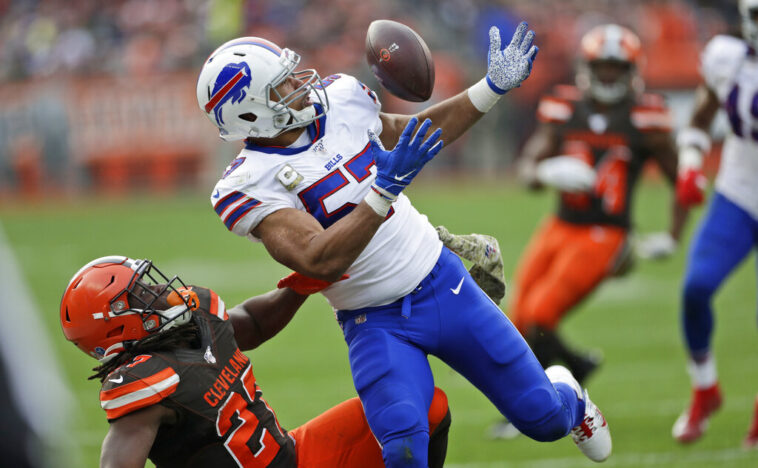 FILE - In this Nov. 10, 2019, file photo Buffalo Bills outside linebacker Lorenzo Alexander (57) breaks up a pass intended for Cleveland Browns running back Kareem Hunt (27) during the second half of an NFL football game in Cleveland. Vowing to retire after this season, the 13-year NFL veteran knows Sunday's regular-season finale against the New York Jets won't be his final game for the playoff-bound Bills. (AP Photo/Ron Schwane, File)
TwitterFacebookLinkedInRedditWhatsApp

Browns vs Bills is another game that will keep Week 11 of the NFL exciting as the two teams will battle it out to go back to winning ways.

Cleveland all but buried its postseason hopes by falling to the Dolphins, a direct rival for the wild card spots, by a 17-39 slate. Buffalo, meanwhile, was stunned at home, falling to the Vikings in overtime by a score of 33-30.

Without further ado, at JefeBet we bring you the best preview of the Cleveland Browns vs Buffalo Bills.

Predictions and Betting Preview for the Cleveland Browns vs Buffalo Bills NFL Week 11 Game on November 20, 2022

With Deshaun Watson’s possible return to action a week away, the Browns have their postseason aspirations pretty complicated by having to face the Bills and Buccaneers in back-to-back weeks.

Cleveland’s defense, which is certainly not one of the best in the league, was easily outplayed by the Dolphins’ powerful offense. The Browns’ 39 receiving points are the most they have allowed to any opponent this season as well as 491 total yards.

With these results, not only are they tied for sixth in most yards allowed per play with 5.8 average, but they are seventh in most average net yards per pass with 6.7 and fifth in average yards per carry with a high 4.8.

On the offensive side, they also failed to score their second-lowest number of points and for the first time failed to surpass 300 total yards. Overall, the Browns’ offensive has worked well, notably their ground game, which now ranks second in rushing touchdowns (16) and sixth in average yards per run (4.9). They also rank 11th in yards per play with an average of 5.6.

The Bills surrendered the AFC East lead with their loss to the Vikings and need to get back to winning ways if they don’t want their postseason aspirations to become more tangled than expected.

Buffalo conceded 13 points to Minnesota in the final period to blow a 10-point lead. No team had been able to score more than 20 points against the Bills this season, so that was by far the most points they had given up. Moreover, it was also the first time this year they have allowed more than 400 total yards and are now tied for eighth-fewest yards allowed per play with an average of 5.2.

On the offensive side, things didn’t work out either. Josh Allen, who was confirmed as part of the starting team shortly before kickoff (he had been suffering from elbow pain) threw for 330 yards and a touchdown but also two interceptions for the third game in a row. In total, the Bills lost the ball four times, but remain one of the best offenses by leading the league in yards per play with an average of 6.5.

Buffalo’s defense won’t have as difficult a time stopping the Browns’ offense as they did the Vikings’, but the Bills’ offense will still have plenty of opportunities to score against one of the worst defenses in the league.

Buffalo is fourth in points scored with 250, while Cleveland is the ninth team with the most points allowed with 238. The Under has occurred in five of the last seven meetings between the two, but with such a low point line on Sunday, we’re sure this will be an entertaining matchup. 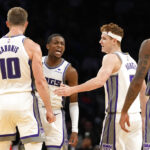 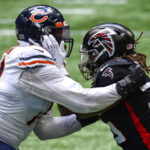