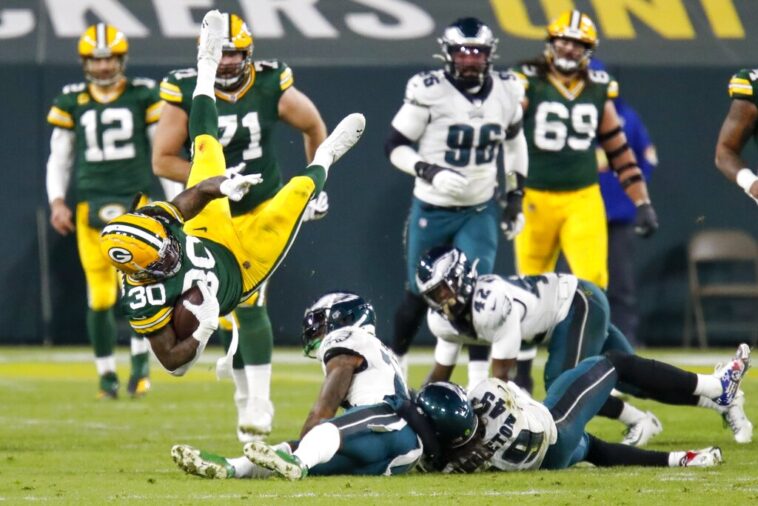 Green Bay Packers' Jamaal Williams is tripped up during the second half of an NFL football game against the Philadelphia Eagles Sunday, Dec. 6, 2020, in Green Bay, Wis. (AP Photo/Matt Ludtke)
TwitterFacebookLinkedInRedditWhatsApp

Sunday’s NFL Week 12 will close out with a pretty interesting Sunday Night Football when the Packers vs Eagles square off.

Green Bay has been one of the disappointments of the season after falling for the sixth time in the last seven games with a 27-17 loss to the Titans. The Eagles, meanwhile, kept up their outstanding season by narrowly defeating the Colts 17-16.

Without further ado, at JefeBet we bring you the best preview of the stellar match between the Green Bay Packers vs Philadelphia Eagles.

The Packers find themselves between a rock and a hard place this season, and visiting Philadelphia is surely not good news for Aaron Rodgers and company.

With 202 points scored, Green Bay is ninth among the teams with the fewest points scored as they have several offensive issues, particularly regarding its receivers. With 4.8 yards per rush, they are eighth in the league on the ground, yet despite that, they have only scored four touchdowns. For his part, Rodgers has thrown 19 touchdown passes, but the Packers are fourth in fumbles lost with 15 and eighth in penalties committed with 67.

Defensively, things haven’t worked out for Green Bay either. In addition to the scoring problems, the Packers have allowed less than 23 points to their opponents in only three games, and in many of the major categories their performance has been at league average. For example, they rank 15th in average yards per play with 5.5, 13th in net yards per pass with 6.4 and ninth in most yards per carry with 4.6.

After being stunned by the Commanders a couple of weeks ago, the Eagles remain with the NFL’s best record after a hard-fought win over visiting Indianapolis.

Despite a slight drop in production, Philadelphia still ranks among the league’s best offenses and its 263 points scored, the fourth-highest total in the league, proves it. The Eagles average 5.7 yards gained per play, have only lost the ball nine times and while their yards per carry average is low at 4.3, they have had long, productive runs that place them sixth in total rushing yards with 1,425 and first in rushing TDs with 18.

The Eagles’ only significant defensive flaw is their inability to stop the ground attack, which they do poorly in, giving up an average of 4.3 yards per carry. The 183 points conceded is the seventh-lowest figure in the league, they are first in fewest yards per play with 4.6, first in lowest net yards per pass average also with 4.6, and no one has recovered the ball more times than they have, with a total of 20.

Although Aaron Rodgers’ talent is undeniable, he will have to play against a defense this Sunday that ranks among the league’s best at preventing the passing game and won’t give him much room to maneuver. Against a Packers defense that has been erratic throughout much of the season, however, Jalen Hurts might take advantage of some opportunities.

What we should not expect is a high scoring game. The Under has a 5-0 record in the most recent meetings between the two in Philadelphia; however, the Under has also lost eight of the previous ten matchups. 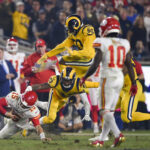 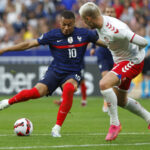