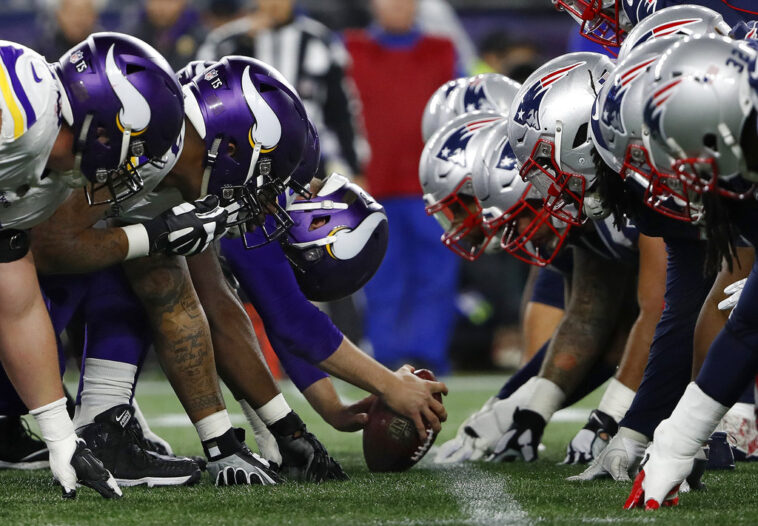 The Minnesota Vikings and the New England Patriots line up for the snap at the line of scrimmage during an NFL football game at Gillette Stadium, Sunday, Dec. 2, 2018 in Foxborough, Mass. (Winslow Townson/AP Images for Panini)
TwitterFacebookLinkedInRedditWhatsApp

The NFL Week 12 on Thursday Night Football will bring three games, because of Thanksgiving, that will close with a clash of Patriots vs Vikings in an inter-conference showdown.

The New England team earned its third consecutive win with a 3-10 victory over the Jets, while Minnesota lost a seven-game winning streak after being crushed 40-3 by the Cowboys .

Without further ado, at JefeBet we bring you the best preview of the interesting clash between New England Patriots vs Minnesota Vikings.

Predictions and Betting Preview for the Patriots vs Vikings NFL Week 1 Game on November 24, 2022

Bill Belichick’s teams can never be left for dead and these Patriots are a true reflection of that. After moving up to third place in the AFC East, they now an adventageous spot after five wins in their last six games.

New England’s defense has been crucial to this season’s resurgence. In each of those five victories they have achieved, opponents have not exceeded the 17 points and in three of them they scored three points or less. Another factor that has been a part of this great performance is the discipline with which they play: being the team with the fewest penalties conceded with 40, the 165 first chances conceded are the second lowest in the league and the 17 balls recovered are the fifth best record.

That’s the only way to get wins considering they have one of the worst offenses in the league. After Sunday, they rank 20th in points scored with 213, they have lost the ball 17 times, the fourth highest number in the circuit, and they have just 171 first downs, the fourth lowest total. The aerial game has also been a problem and their QBs total 10 interceptions for just nine TD passes .

The Vikings played their worst game so far this season last weekend, when they were crushed from start to finish by the Cowboys, a potential NFC postseason opponent.

Minnesota, which leads the NFC North comfortably, struggled defensively again, and for the second consecutive week, it allowed more than 30 points and 450 total yards to its opponents. In this season they are the in third place for being the team with most yards per play conceded, with an average of 5.9, while through the air the secondary has been completely outclassed by allowing the third most yards with 2,673 and they are second in average net yards per pass with 7.1.

Offensively, things didn’t go well either and for the first time since week two, when they suffered their first loss to the Eagles, they scored less than 20 points. One of the virtues of this team is that they have only lost the ball 11 times and rank ninth in first downs with 214.

Despite looking good against an elite defence by the Bills, the Vikings have not scored more than six points against the Eagles and the Cowboys, defenses that are at even level than what the Patriots have done so far.

The problem for New England is that their offense is much weaker than Minnesota’s offense, and they won against the Jets with a field goal and a kickoff return TD. Would their offense wake up against the weak Vikings’ defense? The game looks to be complex as visitors, and in the last six meetings between the two teams the Under has occurred on five occasions. 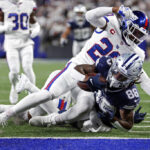 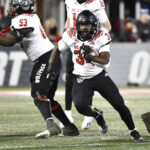