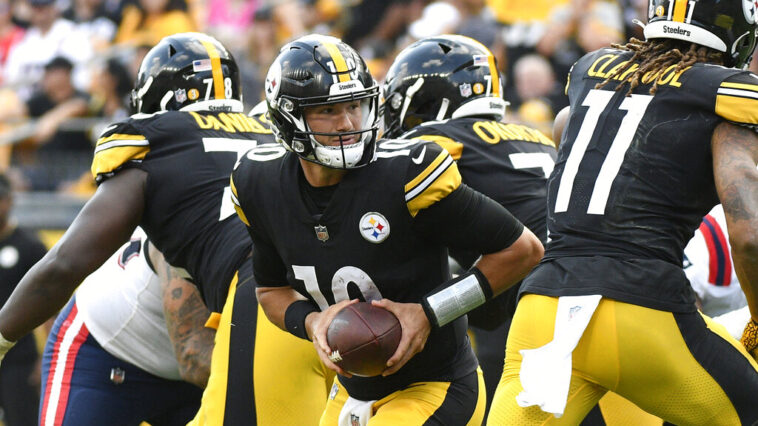 Pittsburgh Steelers quarterback Mitch Trubisky (10) looks to hand off the football during the second half of an NFL football game against the New England Patriots in Pittsburgh, Sunday, Sept. 18, 2022. (AP Photo/Don Wright)
TwitterFacebookLinkedInRedditWhatsApp

Two weeks of NFL action have elapsed, and the Pittsburgh Steelers have been able to survive. With a 1-1-0 record, they share the lead in their division with the Baltimore Ravens and the Cleveland Browns, who will be their opponents this Week 3 on Thursday Night Football.

They beat the Bengals 23-20 in Week 1 and fell 17-14 to the Patriots in their Week 2 game. Will we see a game defined by a field goal again? According to the bookmakers, we won’t. Here, at JefeBet, we’ll show you what they are saying for this upcoming Pittsburgh Steelers game, as well as what the team’s future bets look like today.

Predictions, Odds and Betting Preview for the Pittsburgh Steelers in Week 3 of the 2022 NFL season

For the third consecutive week, the Pittsburgh Steelers will start a game as the underdog according to the bookmakers. They may have won one of their previous matches with that tag, but they required more time to define their victory. As a result, it is believed that they’ll have to make a pretty big effort once more if they are to get a significant outcome against a divisional opponent.

The Pittsburgh Steelers’ three games in the 2022 NFL regular season were all defined by three points of difference. It should be noted, however, that none of the last three games between the two franchises finished with a margin of victory of less than five points.

The point total for their game against the Browns is quite low, and understandably so. The Steelers average the third-fewest total yards after two games in the NFL with just 264, and have failed to exceed 20 points in their games excluding overtime.

The Browns have averaged 28.0 points per game in the first two weeks, but it happened against defenses such as the Panthers’ and Jets’, and while the Steelers are not an elite defense, they might pose more problems.

A win in both games appears to be good news for those who have bet on the Pittsburgh Steelers win Over, but things could quickly worsen if the 7.5 win Over is included.

After this game against the Browns, they must face the Jets, and then the Bills, Buccaneers, Dolphins and Eagles before a bye in Week 9, so having eight wins or more at the end of the regular season will probably depend in large part on what happens on Thursday and next week since it will be a tough schedule.

Despite having the same record as three other teams in their division, among the four teams in the AFC North, the Steelers are the least likely to win the division—even less than the current runner-up Cincinnati Bengals.

These odds could shorten or increase further depending on the outcome of this game, so it will be worth monitoring this market after Thursday Night Football.

If winning the division is difficult, winning the Conference appears to be a pipe dream. In fact, out of the 16 teams that make up the American Conference, the Steelers are 12th in terms of favorites to go to the Super Bowl, so only a fan with a lot of faith could trust that this happens.

Winning the Super Bowl with the current Steelers roster appears unachievable, and their odds at the bookmakers reflect this. A first NFL championship since 2008 appears to be extremely difficult for them to achieve, so much so that their share has climbed since Week 2, when it was a remarkable +6000.

Up-and-comer Mitchell Trubisky failed to live up to the lofty expectations placed on him as the second overall pick in the 2017 NFL Draft, ahead of Patrick Mahomes and Deshaun Watson.

After a less-than-successful stint with the Bears, Trubisky finds himself on the Steelers trying to prove he can still reach his full potential, though a 59.15% pass completion percentage and a 76.1 quarterback rating after the first two weeks confirm that there are many other options above him in the MVP race.

Odds courtesy of BetMGM and DraftKings. We invite you to read our reviews!

If you are looking for more of this kind of content, we invite you to follow us on our Instagram, where we have so much more to offer you about your favorite sports, what are you waiting for? 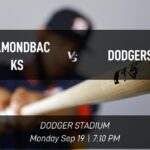 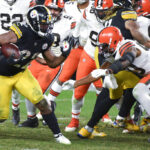