The NFL Week 4 brings us the match between Seattle Seahawks vs Detroit Lions, two teams looking to get back to winning ways and put their record even at 2-2.

Seattle has just lost at home in a hard-fought game with the Atlanta Falcons with a 27-23 score, while Detroit lost in the last seconds of the game, on the road to the Minnesota Vikings, with a 24-28 score

Without further ado, enjoy these Seahawks vs Lions predictions and betting preview, brought to you by JefeBet.

Predictions and Betting Preview for the Seattle Seahawks vs Detroit Lions NFL Week 4 Game on October 2, 2022

After starting the season with a victory over the Broncos, the Seahawks have dropped their next two games, despite the fact that they had a chance to win the last one against Atlanta in the fourth quarter.

Geno Smith had a very good performance, completing 32 of 44 passes thrown for 325 yards with two touchdowns and one interception. However, he was unable to lead the offense to score in the last quarter of the game, when they finished with zero points, trailing by four. And while their visit to Detroit will be anything but friendly, the good news is that the Lions’ defense has been less than productive.

They had a performance similar to the Seahawks, who, after allowing only 16 points to Denver, conceded 27 goals in each of their last two games. Although Atlanta also failed to score in the fourth period of the match, in the first three quarters they did a lot of damage with their ground attack; this is something that the Lions know how to do very well as they have one of the best ground attacks in the league.

Had it not been for the defensive problems, the Lions could have started the season with a 3-0 record backed by one of the most explosive offenses in the NFL.

Jared Goff has been Detroit’s big surprise by having one of the best starts to a season of his career. The quarterback has thrown touchdowns in each of his first three games and at least 215 yards in each of those games. However, the best part of the offense comes on the ground, where the Lions have the third-best average in the league in yards per game and can do a lot of damage to Seattle’s weak ground defense.

While Detroit has scored more than 30 points twice, the least the Lions’ defense has conceded is 27 points, and both of their losses have come by four points or fewer. Last week, the team led the game against the Vikings by 10 points in the fourth quarter and allowed 14 points from Minnesota, including a 28-yard touchdown pass from Kirk Cousins with 45 seconds remaining.

Detroit’s offense has wreaked havoc on opponents both on the ground and through the air. Even the undefeated Eagles themselves conceded 35 points to Detroit in Week 1. Seattle’s defense hasn’t looked at all comfortable against the 49ers and Falcons, and their problems stopping the Lions ground game will be the difference in this matchup. 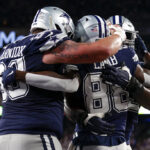