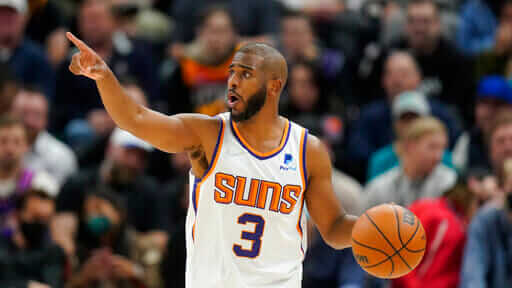 New York Knicks' Patrick Ewing, left, and Mark Jackson sit out the closing minutes of the game with the Chicago Bulls in Chicago, May 13, 1989, as the Bulls went on to beat the Knicks, 111-88. (AP Photo/Fred Jewell)
TwitterFacebookLinkedInRedditWhatsApp

The art of passing the ball and creating offense for others is a privileged skill in today’s NBA, when in many occasions a large part of a team’s offense comes from individual actions.

Having a player capable of directing his teammates in such a way that every possession is a surefire scoring opportunity is a weapon that few teams possess. That is why we wanted to highlight those who have given their careers to demonstrate that their mastery of the ball has led them to become emblematic in the history of their franchises and the league.

We present the 5 players with the most assists in NBA history, who are considered the stars in the art of ball movement.

Selected 18th overall in the 1987 draft by the New York Knicks, the 17-year veteran’s career would consist of being one of the most accurate passers and an extremely consistent starter in a highly competitive NBA during the 1990s.

Jackson was a key player for both Patrick Ewing and Charles Oakley’s Knicks (1987 to 1992) and Reggie Miller’s Pacers (1994-1997), and although he was not very successful individually with only one All-Star Game appearance and his Rookie of the Year award after averaging 13.6 points, 10.6 assists and 2.5 steals per game, he was one of the neatest point guards of the era by averaging 8 assists and only 2.4 turnovers per game.

Jackson ranks fifth among players with the most assists in history, accumulating 10,334.

With 5 assists championships, 2 consecutive MVP awards and 8 All-Star Game appearances, the 6’6″ point guard is remembered for being one of the offensive masters of the modern NBA era.

His contributions within the Dallas Mavericks and Phoenix Suns portray the Canadian as one of the most effective players in league history: averaging 14.3 points on 49% shooting and 42.8% on three-pointers, 8.5 assists and 2.9 turnovers per game across 18 seasons in basketball’s elite.

Unfortunately, Nash was unable to fructify his postseason performance as he frequently found himself up against the dynasties of the San Antonio Spurs and Los Angeles Lakers in the postseason. Nash ranks fourth all-time in assists in history with 10,334 assists and is the current head coach of the Brooklyn Nets.

Known as The Point God for several years now, the only active member of this list continues to leave everyone speechless with his high performance after 16 years in the NBA.

The current Phoenix Suns player is among the league’s top assist averages even at 36 years of age, and is probably the most prolific player in the entire NBA, due to his multiple games with 10+ assists and 0 turnovers.

CP3 has been the exemplary point guard of the 21st century by taking on the role of the team’s offensive engine (averaging 18.2 points with 47% efficiency, 9.4 assists with only 2.4 turnovers per game) without neglecting the defensive end (averaging 2.1 steals and 4.5 rebounds per game).

With 4 assists championships (plus 6 steals championships, 11 All-Star Game selections), Paul ranks as the third all-time player with the most touchdown passes with 10,604 and counting.

Current coach of the Dallas Mavericks, the team with which he won his only championship in the 2010-2011 season, Kidd was characterized by being a complete player in every aspect of his game: three-pointers, passing, steals, solid defense. He was the point guard that any team would want to have in his day.

A 19-year starter, Kidd led the NBA in assists for a total of five seasons, earning 10 All-Star selections, and finishing second in both assists (12,091) and steals (2,684), in addition to a fourth place in triple-doubles as well (107 in his career).

As a perennial member of the Utah Jazz, Stockton is considered the best passer in NBA history, leading the league in both assists (15,806) and steals (3,265) by a wide margin.

Being selected in the 16th position of the first round in the 1984 draft, the 6’6″ point guard would have one of the most impressive careers due to his effectiveness, leadership and consistency throughout the years. Missing only 22 games in his 19-year career (where he was always an undisputed starter), together with Karl Malone, they have been the duo that has been on the court more times than any other, with 1,412 regular season games.

Both are considered the most talented duo of players to never win a championship, losing their only two appearances to Michael Jordan’s Chicago Bulls. Utah made it to the postseason each and every season Stockton was on the team. 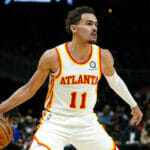 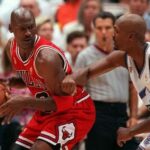