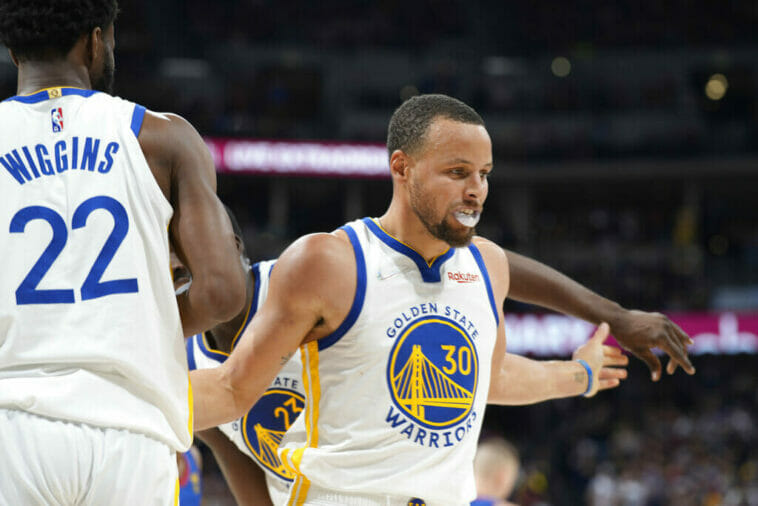 Golden State Warriors guard Jordan Poole gestures to the bench during the second half of Game 3 of the team's NBA basketball first-round playoff series against the Denver Nuggets on Thursday, April 21, 2022, in Denver. (AP Photo/David Zalubowski)
TwitterFacebookLinkedInRedditWhatsApp

In the last game of the day in the Playoffs of the NBA 2022 yesterday, the Golden State Warriors rallied from a three-game deficit to advance to the second round by defeating the Denver Nuggets 118-113, achieving a three-game lead and no losses in the series.

The Warriors trailed for most of the game until the final quarter, and thanks to strong performances from Stephen Curry (27 points, three rebounds, six assists off the bench), Jordan Poole (27 points, three rebounds, three assists) and Klay Thompson (26 points, two blocks) who combined for a total of 80 points between the three of them, managed to capture the win in the last minute of the final period.

Draymond Green also had a big game (six points, five rebounds, 10 assists, two steals), securing the outcome via a steal from reigning NBA MVP Nikola Jokic in the final seconds of possession for the Nuggets. Despite the best effort from this Denver team, who are lacking two of their three stars (Jamal Murray and Michael Porter Jr.) due to injuries that have kept them off the court most of the season, Golden State proved to be too much of an offensive juggernaut.

The Serbian center had an excellent game (37 points, 18 rebounds, five assists, and three steals), but he’ll need a lot more aid to surprise the Warriors, who are more unstoppable than ever. Aaron Gordon had 18 points, 12 rebounds and four assists along with 13 points, four rebounds and five assists from forward Will Barton. No other member of the Nuggets topped 10 points for the rest of the night.

Golden State’s dominance in the current edition of the playoffs is undeniable so far: they lead the entire league in averages of points (122.3), field goals made (43.3), efficiency (54.2%), three-pointers (17) and assists (29.7) per game. Despite injuries, Denver has been one of the most consistent teams in the NBA, which is why they secured the sixth place in the Western Conference. However, it’s true that their current form is no match for the team led by Steve Kerr.

With an all-time record of 0-143 for these teams, who have been 0-3 underdogs in the playoffs of the NBA, the fourth (and possibly final) meeting between the Warriors and Nuggets will be played on Sunday, April 24, at Denver’s Ball Arena at 3:30 PM ET, with Golden State starting as the favorite to end their first-round playoff series. 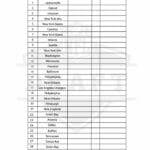 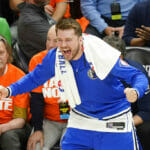